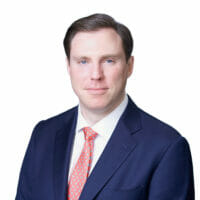 Brad joined Fiducient Advisors in 2012. He is chair of the firm’s Investment Committee and a member of the firm’s Discretionary Committee, Research Forum, Capital Markets Team and Mission-Aligned Investing …

Key Observations
• Russia launched a series of coordinated attacks on Ukraine causing increased volatility in global markets and raising investor concern.
• Risk assets retreated on the unfortunate news as risk-off havens and global commodity markets rallied.
• While Russia is a strategic geological player, their presence in capital markets and influence of global economic growth is limited.
• Past precedents set by other geopolitical events, although tragic humanitarian occurrences, do not often have lasting effects on global economies and market prices.
• At this point, Russia’s recent actions do not change our outlook. However, we will monitor the situation closely for further developments.

Why is Russia Invading Ukraine?
Officially, Russia claims to be taking action to protect Russian citizens, especially those in the self-proclaimed Russian republics of Donetsk and Luhansk who declared independence in 2014 (when Russia last invaded Ukraine). However, Russian interests go much deeper. The collapse of the Soviet Union in 1991 left Russia vastly depleted from its former days of empire building. Security analysts believe this “one people, single whole” mentality is the true root of the invasion.

What is happening in Ukraine?
On February 23, 2022, Russia launched a series of coordinated attacks on key military targets across Ukraine including air, ground and amphibious assaults. The situation remains fluid.

How have markets reacted?
Risk assets retreated given this unfortunate news. Equities, even those with little connection to any activities in the region, broadly sold off in sympathy. Gold, treasuries and other risk-off havens gained in value.

Commodity markets also reacted, with oil prices jumping to over $100 a barrel. European natural gas contracts increased as much as 50 percent based on the news, particularly because Russia is a major supplier to Europe. This type of reaction in energy markets is common with an increase in geopolitical risk, but the timing also comes on the heels of limited global energy supplies, recent underinvestment in production and continued supply chain disruptions. Even before recent actions, Russian equity markets have seen significant downward pressure. As of February 22, 2022, the Russian equity market was down over 22 percent year to date.1 Globally, currency markets are reacting as well. The Russian Ruble fell materially relative to the U.S. dollar and Ukraine suspended its currency operations under martial law.2

How does this impact portfolios?
Most acutely, Russia is 3.29 percent1 of the MSCI Emerging Markets Index. While it is an important geopolitical player in Europe and on the global stage, it is less impactful in global markets. Additionally, it is important to remember the Emerging Markets are a collection of countries with different economic and geographical realities. While the Russian invasion is most likely to hurt the country itself and its immediate neighbors, other countries may benefit. For example, Brazil benefited from higher oil prices globally and if tensions keep prices up, it may continue to do so in the future. Brazil is 4.32 percent1 of the index today and increased materially in 2022. Additionally, companies outside of Russia may experience more nuanced impacts. For example, French car manufacturer Renault has a subsidiary in Russia and its stock traded off materially based on the news.1 Within global fixed income markets, Russia accounts for 0.25 percent3 of the Bloomberg Global Aggregate Index and therefore is a modest contributor to overall risk of the index.

Does this impact the Fed’s decision on interest rates?
Central banks globally, including the Fed, are in a difficult position. With an interest to keep prices under control while not smothering economic growth, they are walking a fine line. Markets largely expect a 0.25 percent increase from the Fed after its mid-March meeting. However, conversation has drifted to a 0.50 percent increase given recent headline inflation numbers. The invasion adds fuel to the inflation fire with higher energy prices, but it may provide the Fed cover to raise rates at a more modest 0.25 percent level based on greater uncertainty. Futures markets imply that a 0.50 percent rate hike is less likely post-invasion than it was the day before, reflecting this change in sentiment as shown below.

What can history tell us about such events?
Sadly, such tragic humanitarian events are not unprecedented. While the social impact cannot be understated, the impact on economies and markets have historically been modest following other similar actions.

Market fluctuations may be causing worry among investors, prompting questions around portfolio positioning and what to do going forward. Join Fiducient Advisors for a discussion on the underlying drivers of …