• U.S. dollar strengthened in September as the effects of existing monetary stimulus wane and expectations for fiscal stimulus before the election fade.
• Market participants bid up financial asset risk premia in response to mounting economic and political risks.
• We encourage investors to keep their investment horizon in focus and not allow emotions to influence portfolio positioning.

With five stocks (Apple, Microsoft, Amazon, Alphabet and Facebook) making up over 22 percent of the S&P 500 Index (-3.8 percent in September), these leaders bear monitoring. U.S. Small Cap stocks (Russell 2000 Index, -3.3 percent) slightly outperformed their larger counterparts (Russell 1000 Index, -3.6 percent) for the month on a relative basis and International Developed (ex-U.S.) and Emerging Market returned -2.6 percent and -1.6 percent, respectively. While relatively higher returns from international equities are encouraging, we acknowledge that international equity indices have less exposure to technology sector stocks. Time will tell if a secular shift is afoot.

Bipartisan support for a fresh round of fiscal stimulus gave way to political gridlock in September and doused investor optimism for a deal before election day on November 3. Amid an already unstable economic backdrop, financial markets had to factor political uncertainty into risk premia. As shown in the chart below, realized volatility leading up to this year’s election is higher than recent elections, except the 2008 election which coincided with the Global Financial Crisis. Furthermore, CBOE VIX futures, a measure of 30-day implied volatility on the S&P 500 Index, illustrates that implied volatility is expected to remain elevated following this year’s election (represented by the dotted line in the chart below).

Heightened equity risk premiums (implied volatility) suggest that investors have priced in the possibility that neither party concede a close presidential race. While that may be true, it is not certain. Nevertheless, present volatility conditions serve as a reminder to adhere to a disciplined investment process and resist the temptation to deviate from a thoughtful strategic allocation framework. For our part, we will keep an eye on the key dates shown in the table below. 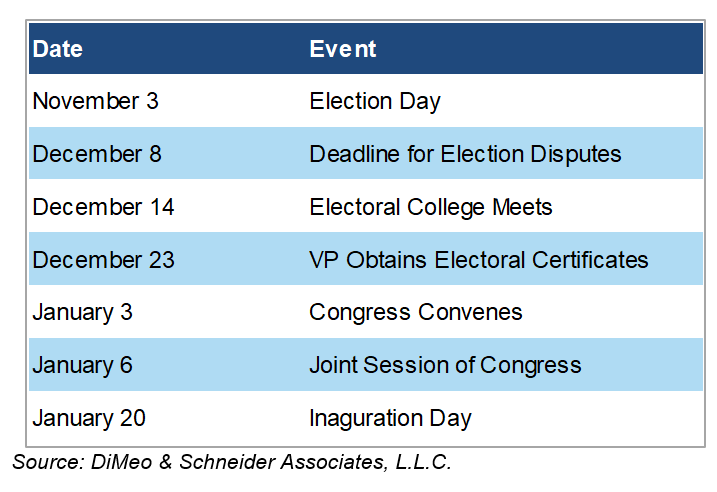 As if an unclear economic growth outlook, timing and amount of fiscal stimulus for households and businesses and political concerns were not enough, corporations will release third quarter earnings in the coming weeks. With an abundance of macroeconomic and political risks fraying investor resolve, we advocate for maintaining the established strategic asset allocation rooted in long-term fundamentals. We encourage investors to keep their investment horizon in focus and to not allow emotions to influence portfolio positioning.